The number of new European investors setting up shop dipped in 2021 from the year before, as the landscape became more competitive for new entrants.
Jill Petzinger 26 May 2022
1
Share
Facebook Twitter Linkedin

While 2021 was a blistering year of mega-rounds in Europe, with over $100 billion invested in the tech ecosystem as a whole, the madness was more muted in terms of the number of new venture capital, private investor and corporate venture players that set up shop.

The “2022 European Capital Report” from i5invest and i5growth with the Vienna University of Economics and Business Entrepreneurship Center found that 61 new European investors were founded in 2021, about half of the 2020 total. Out of that total, 43 are VCs and 13 are private equity firms. The report exclusively examines investors with venture capital, private equity, or corporate venture capital arms, excluding angel investors, family offices, accelerators/incubators and other funding outfits.

Most of the new funds were born in Southern Europe, followed by Northern Europe, DACH, UK & Ireland and Benelux. Overall, the new investors focus on early stage investments, with an emphasis on the energy and sustainability verticals.

Simona Huebl, the CEO of i5growth told Tech.eu that they are careful with interpretations but assume the decrease is due to macroeconomic developments making it more difficult for new venture capital funds to raise money.

"Recent years have shown that financing rounds have become increasingly larger in volume. In addition, startups in very early company phases have also completed increasingly large financing rounds. Smaller funds are more and more pressured by this development, as they can make an ever-decreasing number of investments from their total fund volume," Huebl said via email.

There is also a "winner-takes-it-all" effect, meaning thriving startups can choose between several investors, and tend to want to go with those that have the best reputation and most successful portfolios. "As a result, it has become increasingly difficult for new players to position themselves with promising startups and withstand investors' competition," Huebl noted. 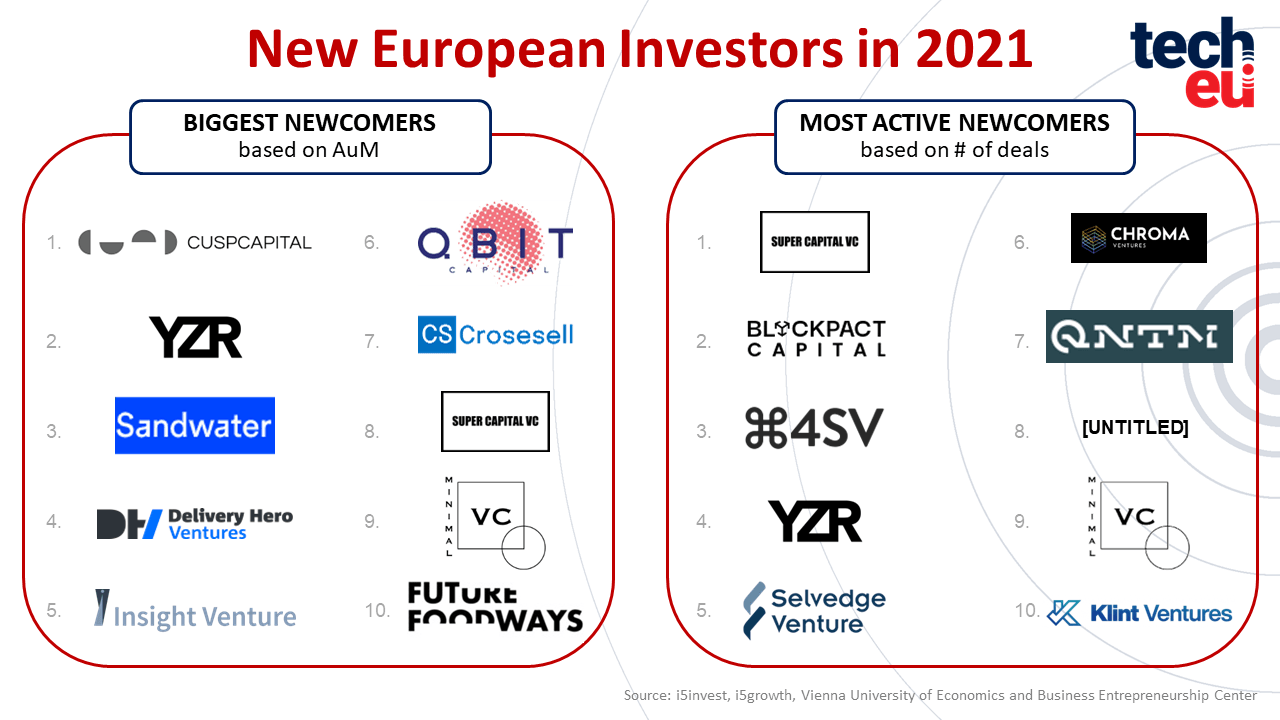 Corporate venture funds are on the rise, with a 2022 Bain & Company report showing that CVC-backed investment has risen from 11 percent of total global venture capital value to around one-quarter.

However, there were only five new corporate venture capital vehicles launched in Europe in 2021 bringing the total number to 62.

The top three in terms of volumes under management are Novo Holdings from Denmark, Deutsche Telekom's DTCP venture and Switzerland’s Novartis Venture Fund.

“However, the bigger the funding round, the more likely we see a US investor in the lead.” said Huebl. “There is definitely potential for more growth capital across Europe.”

Currently, around 120 US funds have an office in Europe, the bulk of them - 90 - in London. An earlier report from i5invest showed that over 80 percent of all European unicorns have at least one US investor on their cap table.

1 like
Growth of new venture capital players in Europe slowed last year
Comments
Follow the developments in the technology world. What would you like us to deliver to you?
All

NEXT
The plot thickens in The Family’s feud with former co-founder Oussama Ammar
In late March of this year, The Family co-founders Alice Zagury and Nicolas Colin filed a…
Dan Taylor