Fintech's up, sustainability's up, transport's down - key themes from Atomico's 'State of European Tech' data

As described in our main findings, European VC investors began to adjust to a new reality from July onwards, as market imbalances began to pull investment levels below yr/yr benchmarks, though there were plenty of bright spots across the ecosystem, in specific countries, in 2020 growth terms and the continuing GDP-to-VC engine that is the UK/France/Germany.

To be included, these tech companies must have raised at least one funding round from January 2018 to October 2022, and were then subjected to a proprietary thematic model consisting of 15 unique sectors and more than 130 themes (the model itself was trained on a large-scale set of manually-labelled companies.)

Atomico also applied a deep learning system to label companies thematically, and this has enabled it to polish the way in which its sector groupings are composed and key emerging themes.

The revised definition for deep tech excluding enterprise software includes 82% of capital poured into deep tech as a whole, and 95% of the "purpose-driven capital" tracked as per Dealroom's criteria.

Atomico stresses that the mapping it uses internally and Dealroom are not always perfectly aligned, and that there was a potential bias toward capturing companies "related to more recent sectors and themes."

Regarding Atomico's analysis of $1 billion valuation startups and the correlation with the year they were founded in, there were a few standout sectors.

These sectors came both in terms of those producing unicorns consistently across different time horizons, and areas only starting to mature their unicorn potential now.

In particular, the retail and consumer sector was shown to be going from strength to strength, taking a 10-15% share of $1bn+ companies across different time periods.

In more recent cohorts of $1 billion+ companies, there has been emerging growth for food and drink, clean energy and transportation sectors.

Europe's tech ecosystem has consistently spurred the formation of "breakout" fintech and enterprise software companies ⁠— when combined over the lifespan of Atomico's data collection, these two "themes" accounted for almost 4 in 10 (38%) of European unicorns.

That success story is continuing to make an impression on venture investors. Almost half of capital invested into Europe in the YTD (46%) have tracked companies to which Atomico has assigned one of the two aforementioned themes.

Across the board, Atomico's data shows the thematic potential for unicorns remains robust even though the share of unicorns varies from sector to sector. Enabling technologies and health and wellbeing are seen as being "overweight" this year in terms of their share of capital investment, meaning they could be key themes that will produce future European breakout companies. 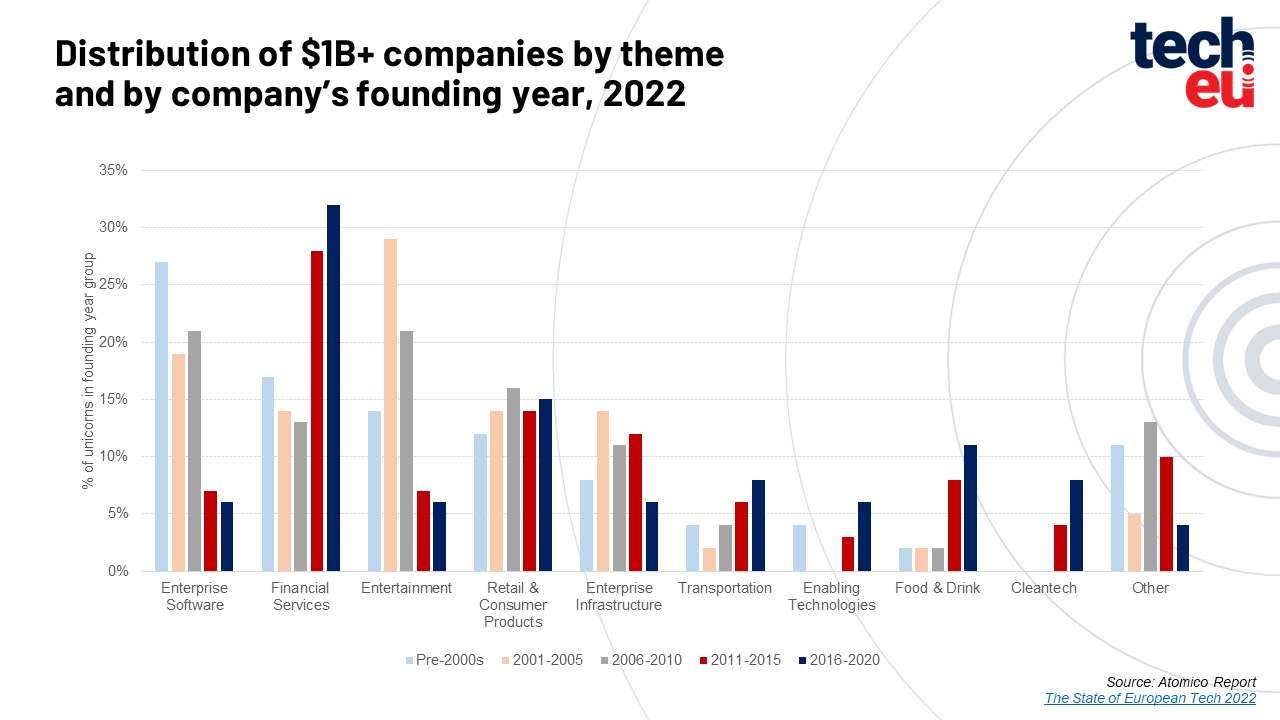 Flat investments are the "new up"

It's important to note that the holistic data picture is no longer about massive year/year funding increases  - in the context of a year in which total capital invested fell 18% year/year, Atomico says flat levels of investment by theme are the "new up".

But even with the endurance of supply chain and logistics bottlenecks, compounded by shortages of workers, the data suggest there's a strong "set of tailwinds" at the interplay of robotics and industry.

Elsewhere, European materials innovators had themselves a "standout" year, raising 37% more funding in Y/O/Y terms thanks to a slate of emerging businesses, covering for instance new forms of packaging, graphene-based electronics materials and sustainable leather products. 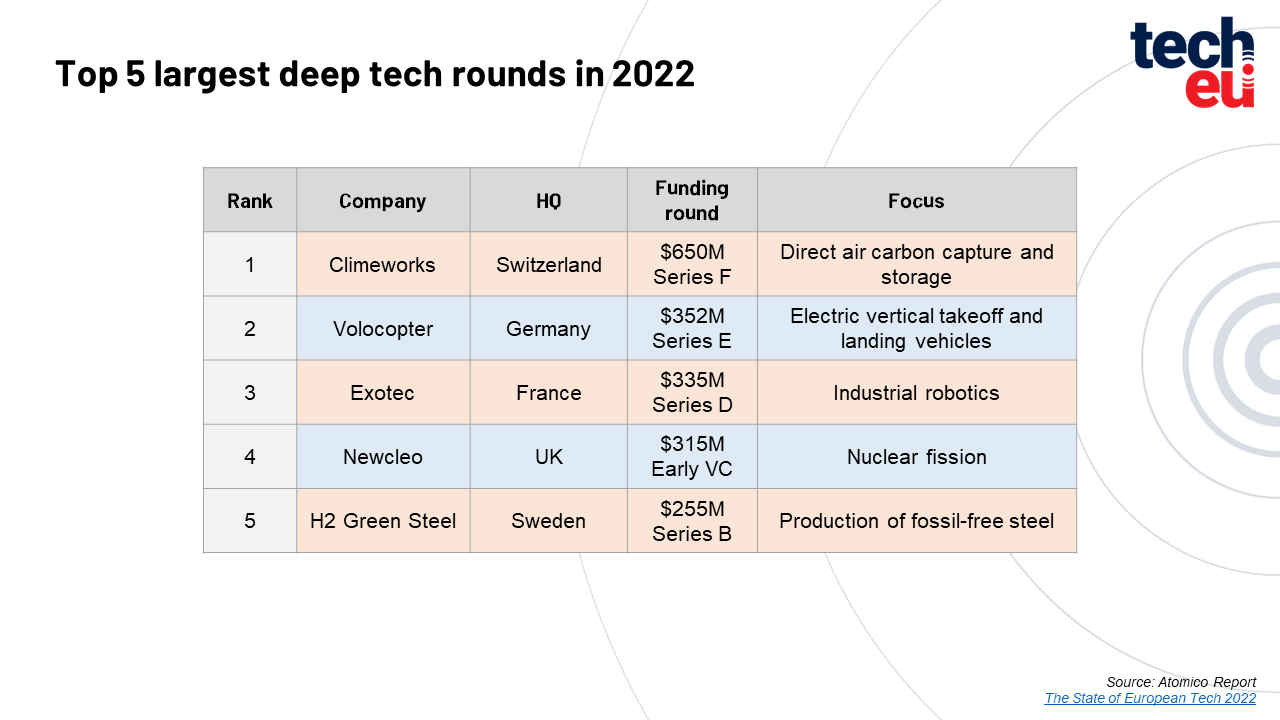 Further good news for European VC includes a surge of activity in 2022 in enterprise infrastructure. While still seen as relatively small in terms of absolute investment compared to the fintech sector, enterprise infrastructure includes numerous emerging clusters that are catching the attention of investors, including business intelligence, data tooling and security and authentication.

Two "cross-cutting" themes were of interest across multiple vertical categories, namely deep tech and sustainability. Money continued to pour into deep tech startups in 2022, and while the YTD score is roughly a quarter lower than 2021's record-breaking levels, it is still almost double that recorded in 2020.

Sustainability is increasingly interwoven with deep tech  - Atomico's analysis of the top 10 largest deep tech rounds suggests sustainability is embedded across many of these startups; for instance carbon capture and storage tech startup Climeworks, which raised the biggest round last year (a $650 million series F.)

But while most of Europe's innovation ecosystem was still enjoying buoyant yr/yr funding growth, the transport sector was becoming a bellwether for the storm ahead as early as April. 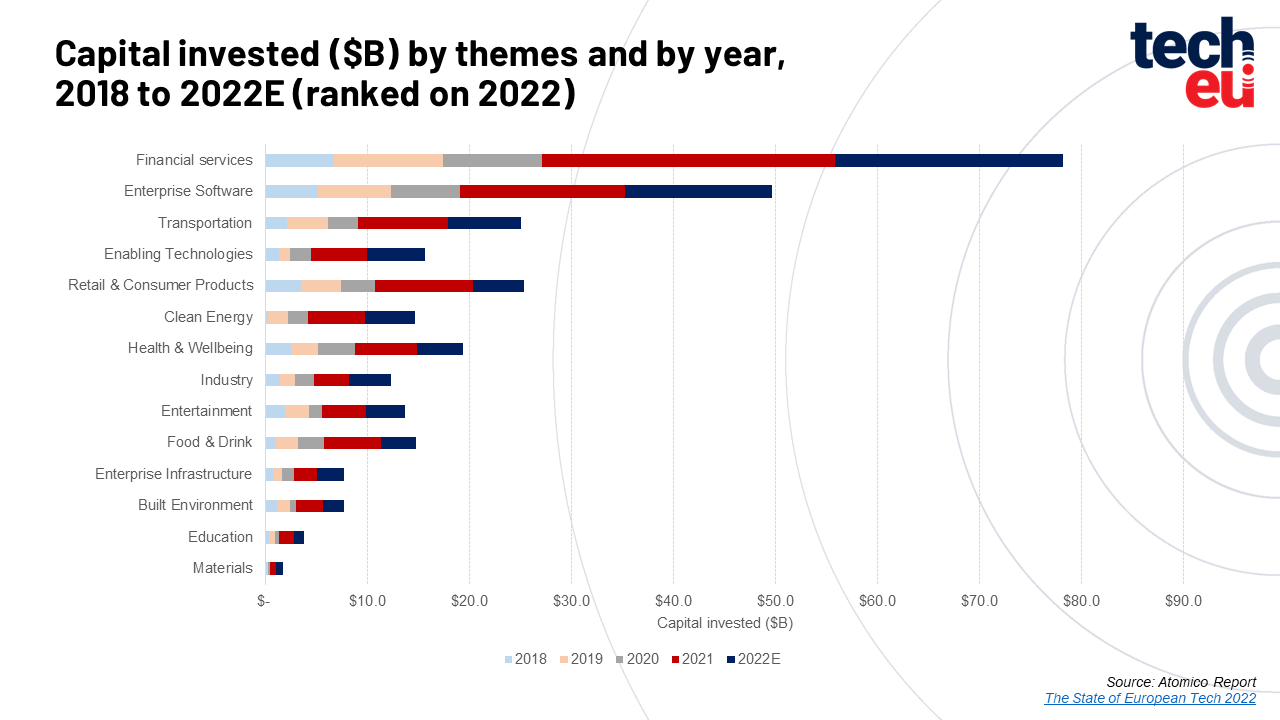 Atomico's figures show euros to European transport sector startups was around €1.6 billion in the first four months of this year, almost 20% lower than the comparable figure for January-April 2021. By October, transport has a near-50% (48.6%, to be precise) lag on the first 10 months of 2021.

Intriguingly, this picture matches up with the tail-down in venture dollars to the supply chain tech VC sector set out by Pitchbook in the third quarter.  (Pitchbook says that in January - September, supply chain venture funding deals fell by 37.7% on the quarter and 55.7% on the year, and 40.7% below five-year quarterly averages.)

It's possible that external trends like the quick commerce boom in supply chain and logistics  companies (largely prevalent in 2021) have begun to ebb away this year, bringing the overall funding data for transport closer to its natural venture funding trajectory.

Mobility Fund's Jan-Christoph Rickers confirmed to Tech.eu that quick commerce models were finding it "notoriously difficult" to secure funding. "In my opinion, this is because the end customers have never been and will never be willing to pay the real cost of the delivery," Rickers stated via e-mail.

"Investors have borne the cost in recent years. Since investors are now looking more towards long-term profitability than just growth, many startups fail."

University innovation forms a key part of the wider European ecosystem, though Atomico suggests this has been hindered by technology transfer offices "dragging their feet." (this part of the report cites data from Air Street Capital's Nathan Benaich's spinout tracking project, spinout.fyi.)

TTOs are used by universities to negotiate the equity terms for spinning out new businesses based on their IP (which generally remains under their ownership until a licensing agreement has been signed with the academic founders."

The median stake demanded by TTOs in Europe was roughly on trend with the US, where the median roughly 4%. However the UK is significantly lagging in this area, with British TTOs typically taking almost 3 times as much as their US peers. 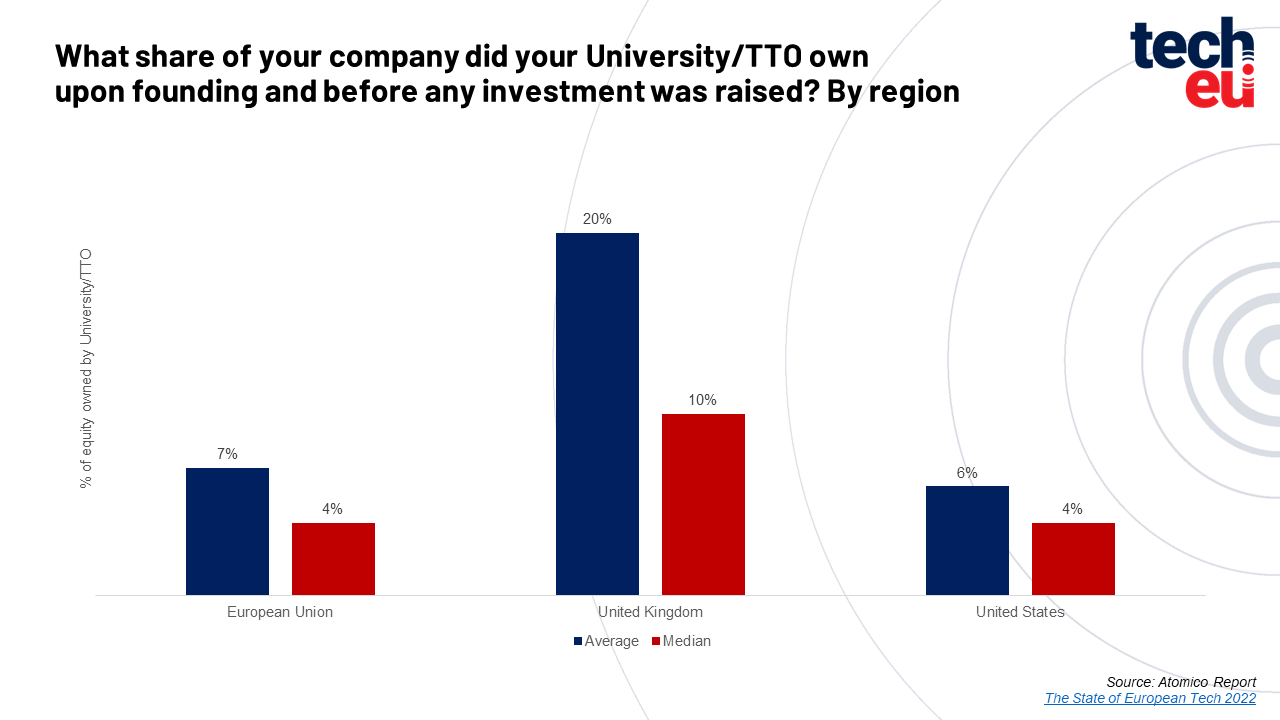 In addition to the above, we’ve also had a look at:

Fintech's up, sustainability's up, transport's down - key themes from Atomico's 'State of European Tech' data
Comments
Follow the developments in the technology world. What would you like us to deliver to you?
All