Paris-based neutral atoms approach quantum computing startup Pasqal has raised €100 million in a Series B funding round. The quantum processor maker will use the new capital to further develop its research and development efforts to build a 1,000-qubit quantum computer in the short term and fault-tolerant architectures in the long term. Since 2019, the startup has now raised over €125 million.

In addition to Temasek’s lead, Pasqal’s €100 million Series B round saw the participation of the European Innovation Council (EIC) Fund, Wa’ed Ventures, and, naturally Bpifrance, through its Large Venture Fund. Existing investors who’ve continued their support include Quantonation, the Defense Innovation Fund, Daphni, and Eni Next.

Based upon the nobel-prize winning research of company co-founder Alain Aspect, we first covered Pasqal during their €25 million in Series A that was announced in June of 2021. At the time, the company used the €25 million to further develop its analog and digital quantum processors, beef up its applications co-design approach, develop a QCaaS (Quantum Computing as a Service) hybrid cloud offer, and begin international expansion. 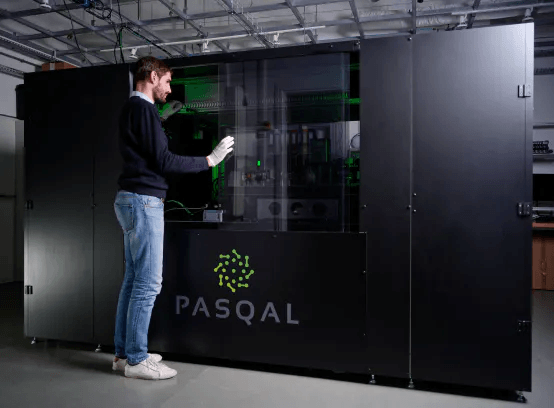 Fast forward some 18 months, and it would appear the Pasqal is now making the leap to the big time, quadrupling the size of this Series A investment and ramping up the production of its quantum systems for on-premise installations as well as expanding the development of proprietary algorithms for customers across key verticals including energy, chemistry, automotive, mobility, healthcare, enterprise technology, finance
and government.

“We are on a clear path to deliver a quantum computer capable of unlocking commercial advantage for our customers, and this latest investment round will help us reach this goal by 2024,” said Pasqal CEO and co-founder Georges-Olivier Reymond. “This funding round validates that neutral atom technology is a premier platform for delivering real-world quantum applications, and we are proud to see its potential recognised by top investors.”

As for these customers Reymond speaks of, the roster reads of a who’s who of Fortune 500’s. The company recently released research with the world’s largest cooperative financial institution, Crédit Agricole CIB, demonstrating that Pasqal’s technology could solve complex financial optimisation problems as accurately as classical computers.

Chemical giant BASF is exploring how Pascal’s technology can be
used to predict weather patterns, while BMW is leveraging Pascal’s algorithms to simplify complex simulations that can be used for crash testing and the development of lighter parts and materials.

On the investment, an early backer of Pascal, Quantonation Managing Partner Christophe Jurczak commented, “We are very proud of this new milestone in Pasqal’s development that will make the company a world leader. Quantonation has supported the company since its spin-off from Institut d’Optique. It is the first scale-up within Quantonation’s portfolio, and it truly illustrates the excellence of French research and the competitiveness of the French quantum ecosystem.”

And speaking of the French quantum ecosystem, don’t miss what neighboring startup Welinq is doing in the related neutral atom space.

Temasek leads €100 million round in atomic-level quantum processor builder Pasqal
Comments
Follow the developments in the technology world. What would you like us to deliver to you?
All