Zooming in on the United Kingdom, the Startup Europe Partnership has released a new report identifying and mapping the country's tech 'scale-ups', or startups that have attracted capital to grow.
Robin Wauters 21 November 2014
Share
Facebook Twitter Linkedin

The Startup Europe Partnership (SEP), a platform meant to stimulate the region’s tech ecosystem that has received backing from several large corporations (Telefónica and Microsoft among others) and education institutions from across Europe, has set out to identify and collect data on startups and 'scale-ups' continent-wide.

SEP has already released a preliminary study on European scale-ups (which you can download at the bottom of this article), but it has also published country-specific reports under the 'SEP Monitor' banner.

The first SEP Monitor zoomed in on the Italian ecosystem (also see our deep-dive into the local scene), and today SEP is launching a new report that focuses on one of Europe's major tech hubs: the UK.

Scaling up in Blighty

Freshly ranked as the most entrepreneurial country in Europe (and fourth in the world), the UK is home to approximately 400 ICT 'scale-ups', according to the most recent SEP Monitor.

The term 'scale-up' can mean different things, but for SEP it means ICT companies based in the UK that have raised more than $1 million in the last three years.

According to the preliminary study results, approximately $5 billion was invested into UK tech scale-ups via VC funds during that period, while another $4 billion was collected on the stock market through initial public offerings (more on exits below).

In the past 3 years, 15 UK companies also reached 'scaler' status, according to the SEP, by raising more than $100 million each. The list includes Powa Technologies, Truphone, Kobalt and Borro. 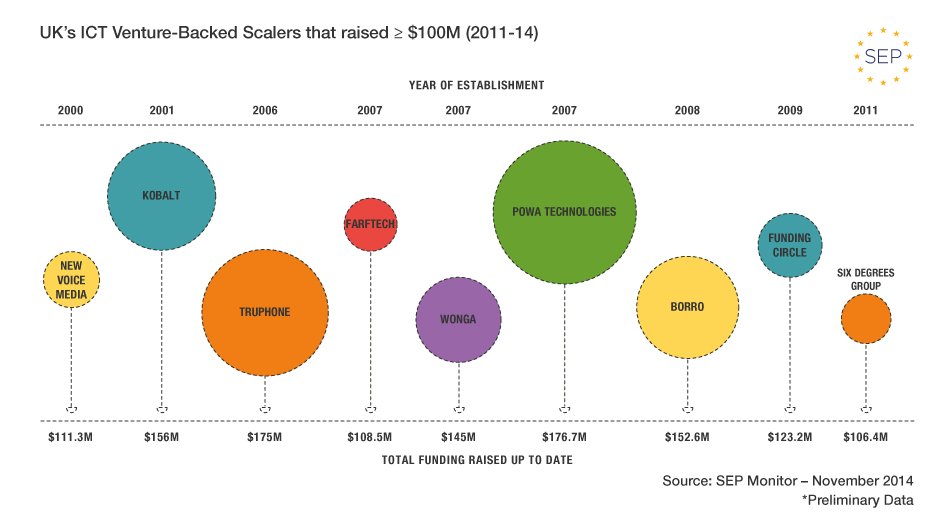 The new SEP Monitor further identified 359 UK tech scale-ups that received post-seed funding (>$1 million in capital raised) in the past three years through VC funds, about 70% of which raised between $1 million and $9 million. A total of 112 scale-ups raised more than $10 million.

SEP identifies companies like Shazam, Hailo, DataSift and Mimecast as some of the UK's most promising scale-ups in tech, though we respectfully think there are many more. 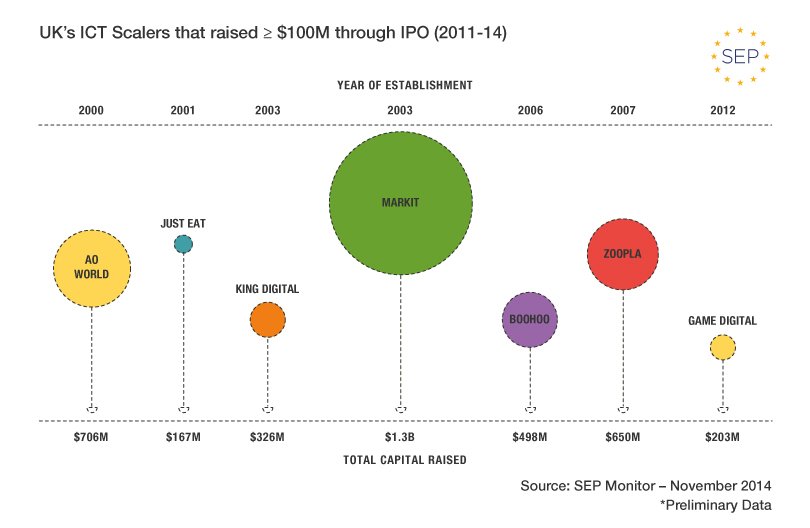 More than 10 companies raised money through an IPO in the past three years, including the likes of Markit, AO World, Zoopla, King and Just Eat, SEP found.

Others were way smaller: Rightster, an online video marketing platform headquartered in London, raised $32 million in an AIM IPO about a year ago, while Cambridge University spin-off Ubisense floated on the stock exchange in 2011, raising $14.5 million.

According to the SEP Monitor, the categories 'Software Solutions' and 'E-commerce' drive the growth of the UK’s tech startup ecosystem, accounting for 16% and 14% of all mapped scale-ups, respectively.

The 'Enterprise Services' sector accounts for about 11% of the companies, closely followed by 'Mobile', 'Advertising' and 'Gaming + Social' sector that all appeal equally to 8% of the identified scale-ups.

Fintech may be big in London, but only 5% of the identified scale-ups fall under that particular category today, SEP found. 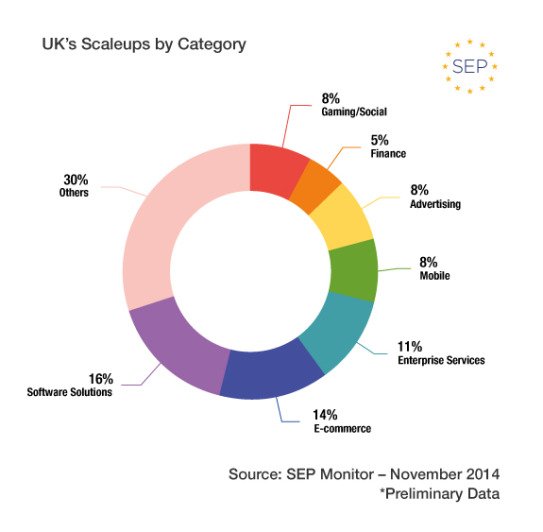 Exits in the UK 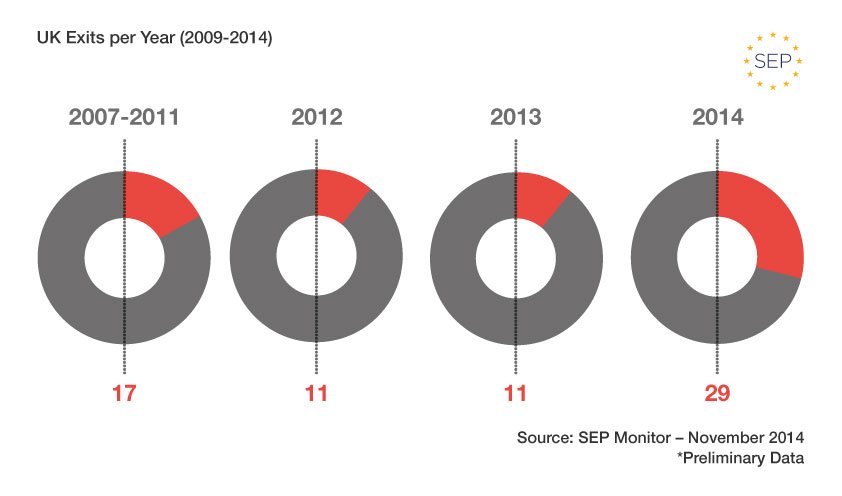 As for exits in the UK tech industry, there have been a few whoppers, with three in particular: Autonomy (acquired by HP), DeepMind (acquired by Google) and NaturalMotion (acquired by Zynga).

It's important to note, however, that out of the 54 acquisitions SEP tracked in the last three years, the terms of about 40% of deals remained undisclosed.

Going beyond the early stage: the UK has produced roughly 400 tech 'scale-ups', report says
Comments
Follow the developments in the technology world. What would you like us to deliver to you?
All