European job marketplaces are going mobile-first, but is there room for all? 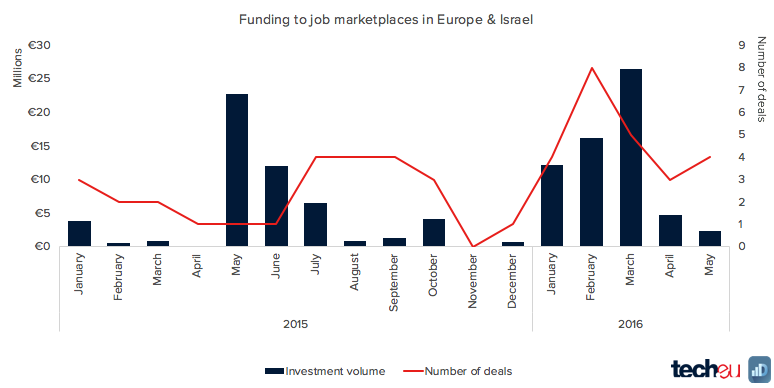 As Andreessen Horowitz’s Benedict Evans tends to say, mobile is eating the world. And it’s eating it in multiple ways, across many industries, and also heavily influencing how people plan a career change and look for a new job.

At least, this is what multiple startups across Europe and Israel are betting on.

Funding activity from startups that have built job marketplaces (mobile-first or not) is up significantly in 2016 versus the same period a year ago. According to tech.eu and Dealroom’s data, 24 different job marketplace companies have raised funding in the first five months of 2016, almost the same amount as in the entire previous year (26).

In terms of investment volume, these companies have raised a total of €61 million, more than in all of 2015, when startups in the category raised €53 million (50% of which came from just one company, Madrid-based Jobandtalent).

This second advent of job marketplaces is being driven, primarily, by startups that are tackling the market from a mobile-first approach and, most, are also catering to blue-collar workers and the services industry. 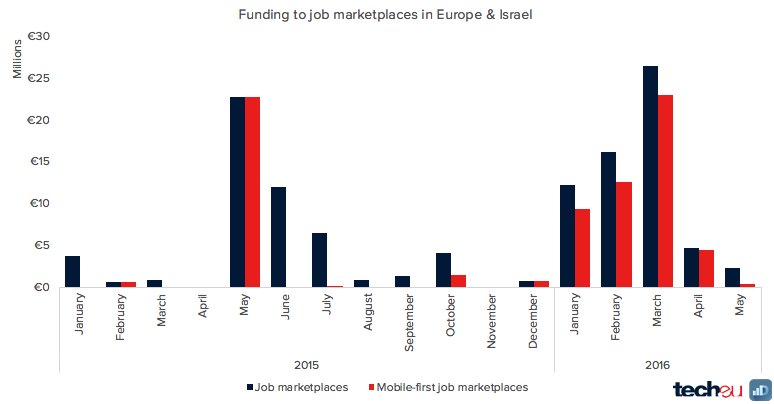 As the graph above shows, mobile-first job marketplaces accounted for the vast majority of the funding raised in the European jobs space over the past few months.

80% of the capital raised in the first five months of 2016 came from apps like Luxembourg-based Jobtoday (€9.1 million), Spain’s CornerJob (€12 million), Denmark’s TrueLinked (€2.1 million) and UK-based Catapult (€1.4 million), among others.

With high unemployment in multiple European economies (especially in Southern Europe, where Jobtoday or CornerJob have a strong and growing presence), these apps are, theoretically, making it easier to connect workers and businesses for temporary or short-term jobs. A trends that’s also being powered by the so-called gig economy.

As with every marketplace business, finding the equilibrium between supply and demand will be key for these startups to grow substantially and steal market share from competitors. Which leads me to believe that a handful of pan-European companies will rise to the top and dominate the sector, while smaller ones operate in local markets and an even larger number will struggle to survive.

The food delivery wars in Europe may not be over, but funding for new players has certainly dried up

European job marketplaces are going mobile-first, but is there room for all?
Comments
Follow the developments in the technology world. What would you like us to deliver to you?
All

NEXT
Applications are now open for the 2016 EIT Digital Challenge
(Editor’s note: This is a sponsored article, which means it’s independently written by our…
Jonathan Keane