Whether you believe the hype that widespread self-driving cars are just around the corner or are still years away, autonomous vehicles will hit the streets eventually - and Latvia wants to be a part of it.

A public-private partnership in the Baltic country will see the opening of a new self-driving car test track in Riga as well as public road testing. The government-backed initiative is working with academia, the telecoms industry, and startups to develop Latvia as fertile ground for self-driving research and testing.

The Latvian model for self-driving cars will be based on the approach used in Singapore, which has reached an advanced stage of autonomous vehicle testing both on closed tracks and public roads.

The Southeast Asian nation has developed specific test roads in the city-state for driverless taxis, working with MIT spinout NuTonomy. Its government recently passed amendments to road traffic laws that will allow testing of the vehicles on public roads – within certain time limits – and reduce liability for car operators if an accident happens.

It’s the most sophisticated testing of autonomous cars in the world so far, and one that Latvia is hoping to mimic for Europe. The collaboration includes Latvian telco Latvijas Mobilais Telefons (LMT) and researchers from the Riga High Technology University.

“We tried to take the best of this approach to Latvia. One is a closed racing track called TEIKA. This is a very old race track for cars and a very good place actually for self-driving to be tested in a closed environment,” said Rihards Gailums of Latvian self-driving technology startup, Pilot Automotive Labs, which has been pushing for the Baltic state to play a greater role in autonomous vehicle research. 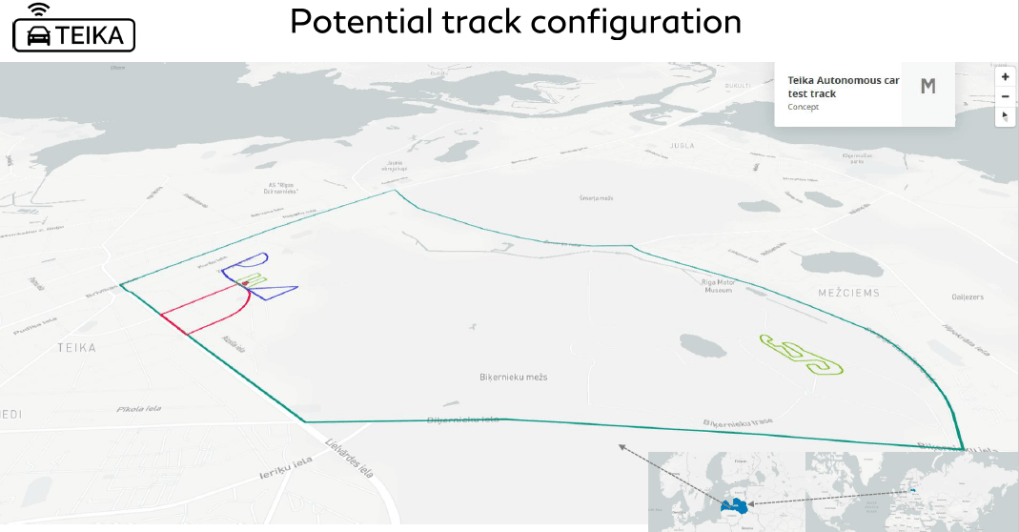 LMT is building a 4G network around the track with Nokia equipment with a view to providing 5G connectivity in the future, as it will likely be a critical component for car-to-machine communications.

The World Economic Forum ranks Latvia at 49th for infrastructure quality, which includes road networks, behind several other EU countries - and neighbours Estonia and Lithuania.

“We do not have the best roads in the EU, we have a very challenging environment, starting with potholes to very bad street markings. This is a really challenging environment for self-driving cars,” said Gailums. This poor infrastructure could be a blessing in disguise of sorts as it would give researchers a chance to test their vehicles on realistic terrain.

But holes in the roads aren’t the only things that need filling in Latvia, as the nation’s road traffic laws will need to be adapted to make these aspirations possible. There is still a legal grey area around the retrofitting of cars and what will be street legal, explained Gailums.

When we talk about autonomous cars, there are important distinctions to make. The SAE International standards for automation lays out six stages, 0-5, on different levels of automation. Zero, as expected, means no automation whatsoever and five means total automation with no human interaction necessary.

Many of the tests that are ongoing today are for cars in the middle two to four range. For example, Tesla’s Autopilot, a feature on the market today, is considered level two. The next steps for autonomous testing is getting to stages three and four safely.

Regulators and lawmakers need a firm grasp of these levels as the burden of responsibility begins to shift from the driver to the car.

“Level four is the entry point for liability for the carmakers,” he added. “If a carmaker says this is level four ready, it should take responsibility that this car will drive you from point A to point B.”

Latvian self-driving researchers need more clarity on what the tests will permit. A spokesperson for the Ministry of Transport told tech.eu that it is forming a working group to “initiate research and work on the possible preparation of potential amendments to facilitate and ensure self-driving car testing and use in Latvia.” But for now, there are no specifics on what these amendments will look like.

The legal grey areas are further exacerbated by car companies pushing to get their technology commercially ready ahead of their competitors. The legal frameworks and bureaucracy that comes with that simply isn’t moving at the same pace, but on an international level, driverless technology regulation is gradually taking shape and becoming clearer - if rather slowly.

While Latvia’s Ministry of Transport is reviewing legislation, the Ministry of Economics will be responsible for attracting investment, and competition will be tight. Its Baltic neighbour Estonia has similar ideas. It passed new rules in March to allow autonomous cars on roads provided there is a driver present. The tests will allow for SAE levels 2 and 3 vehicles. However, Gailums is confident that Latvia will secure its place in Europe’s autonomous car landscape.

“Usually governments are very slow and very bureaucratic, I get the feeling they are moving faster,” he said. The Latvian government has reason to start moving faster. For the second half of 2017, it will hold the presidency for the OECD’s International Transport Forum.

“It means that Latvia could influence international legislation,” said Gailums. “That’s a huge opportunity for our transportation ministry.”

Latvia is staking its place as a hub for autonomous car testing in Europe
Comments
Follow the developments in the technology world. What would you like us to deliver to you?
All

NEXT
Food delivery startup Delivery Hero makes it official, prepares for an IPO 'in the coming months'
Berlin-based Delivery Hero is growing fast. It…
Robin Wauters