De Cooman was previously a brand manager for Coca-Cola and Unilever. He saw, from the inside, how advertising and marketing budgets and attitudes were evolving. He soon identified a serious problem in the way digital advertising was going. Companies big and small were pumping significant chunks of their advertising budgets into Google and social media channels like Facebook.

“This was shrinking the local advertising market and sucking money out of the local economy.”

At the same time, user behaviour and expectations continue to evolve too. Using his background in communications, De Cooman cofounded Spott, based in Brussels, which has raised more than €3 million (under its Appiness company).

Its app allows users to interact directly with TV shows through a second screen and purchase goods they see on the show.

“ wants to choose when they interact with brand content instead of just receiving branded messages all the time,” he said.

The age-old method of bombarding the consumer with advertising messages doesn’t fly anymore: “Spott wants to move to a new model where you invest in content that attracts an audience and use that content to better monetise your audience.”

In the traditional way, content like TV shows is disrupted by advertisements. It forces the message on the viewer in the hopes that they’ll take notice. The industry needs to shift away from this style, according to De Cooman, to a method that generates content that attracts eye-balls but where the product doesn’t distract from that content either. How do you create this balance?

“ takes away an inefficiency in the market, that when you see something and are being inspired, you want to act upon that inspiration and that’s something that’s currently not possible.” 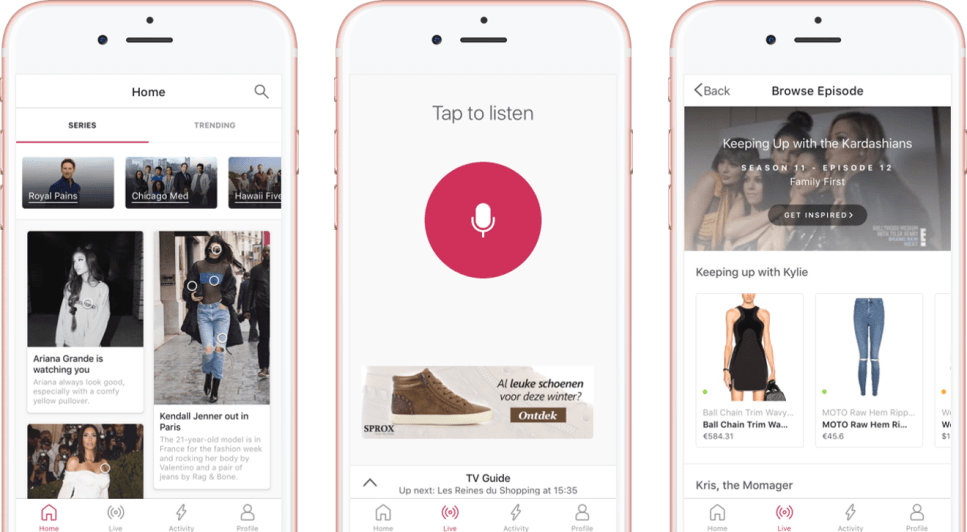 Spott’s business model is both B2B and B2C. It provides consumers a means to make purchases during TV shows, of which it takes a cut, and it strikes deals with brands, content creators, and broadcasters to make this all possible. Spott has deals with most TV stations in its native Belgium – “For example, you can synchronise with The Voice or with The Big Bang Theory.”

According to the company, the brands and broadcasters see increased viewership and engagement and thus an increase in ROI opposed to traditional advertising. This in turn allows companies to develop better content strategies based on firm data from Spott on impressions, clicks, purchases, and what’s popular and what’s not. On the consumer side, it has around 90,000 registered users of which 35,000 are monthly active users.

The company generated about €1.7 million in revenue in 2017, which includes its partner deals, and is working now on expanding its network of brands and broadcasters: “The biggest revenue comes in from the brands where brands use us as their partner for making their content strategy interactive.”

Spott is not seeking to raise any investment but rather it is working on deals in various countries. It acquired US competitor Spylight late last year, it will be launching with Portuguese media company Impresa next month, and it has inked a deal with Sony Music to launch in Brazil in April.

Adtech startup Spott is connecting viewers directly to their favourite TV shows
Comments
Follow the developments in the technology world. What would you like us to deliver to you?
All