TransferWise's business has been ramping up quite nicely, as it currently handles over £4 billion in cross-border payments every month from more than 8 million customers.

The UK-based fintech scale-up is today announcing its results for the past financial year, reporting a 70% rise in revenue to hit £302.6 million, and a nice little net profit of £21.3 million for the fiscal year, which ended March 2020.

It marks the well-funded company's fourth year of profit, as it expands into areas other than money transfers (which still contributes slightly more than half of its total revenue). To illustrate this, TransferWise is reporting that it holds about £2 billion in borderless accounts, with 107,000 businesses on-boarded in the financial year for its 'TransferWise for Business' service. 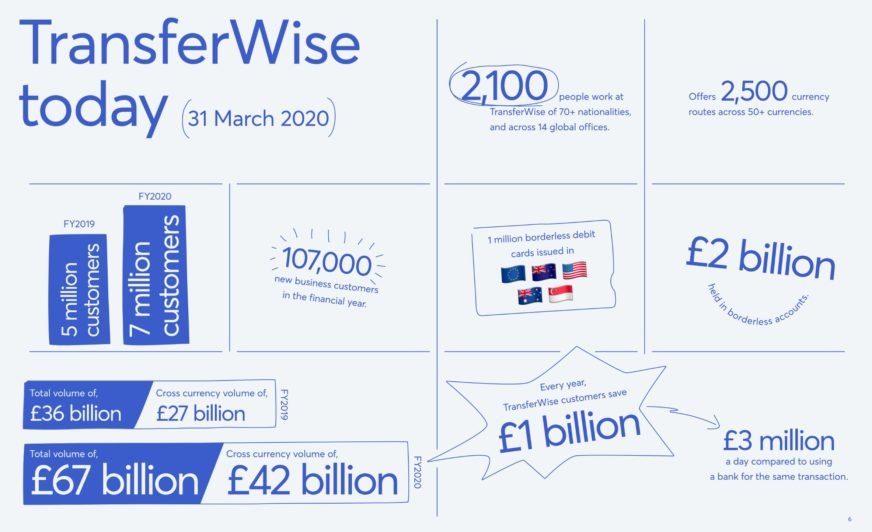 The company has launched new products across Europe, the US, APAC and the Middle East in the past year. Its US business is doing well - launched in 2015, the market now contributes 26% of TransferWise's revenue - but the company says APAC is its fastest-growing region.

"TransferWise is about building a new way to move money in the world, the numbers on the balance sheet are there to support that. We’re building a way that’s faster and more convenient than the banks that came before us, and at a drastically lower, transparent price.

"Staying profitable as we grow is an essential proof point in this journey. We need to be able to scale globally while building a business that people can trust will be here for the long term. The numbers show that we’re continuing to do that, while staying focused on bringing our service to everyone that needs it," he added.

Today, the company supports 2,500 'currency routes' and 54 currencies in total. TransferWise was valued at $5 billion when it launched a secondary share sale worth about $319 million in July 2020, taking its total raised - in primary and secondary funding - to over $1 billion.

The company employs more than 2,200 staff today across 14 offices.

Check out our recent interview with TransferWise CFO Matt Briers for more.

TransferWise grows annual revenue 70% to hit more than €330 million (and €23 million+ in net profit)
Comments
Follow the developments in the technology world. What would you like us to deliver to you?
All

NEXT
Index Ventures: European startups are not so interested in setting up a tech base in the US anymore
As the European tech ecosystems continue to…
Robin Wauters