While dry powder levels hit an all time high of $44 billion, European VC activity and competition slowed in 2022

Released today, Atomico’s State of European Tech report reveals that after 2021’s flurry of activity, 2022 has seen a slowdown, perhaps even a return to “normal”, due in part to decreased competition and market uncertainties. Given this pumping of the breaks, and decreased deployments across the board, European VCs now see themselves sitting atop a record stockpile of capital available for deployment.

Drawing from data provided by the European Data Cooperative, as developed by Invest Europe, over the past five years, the level of European VC dry powder has been growing at a factor of 2x when compared to the previous five years. In so much, when combined with the aforementioned slowdown in activities, according to Invest Europe's data, as of the end of 2021, we’re now looking at an all-time high of $44 billion of capital available for future deployment, a figure Atomico expects to only rise when 2022's data is released later this year. 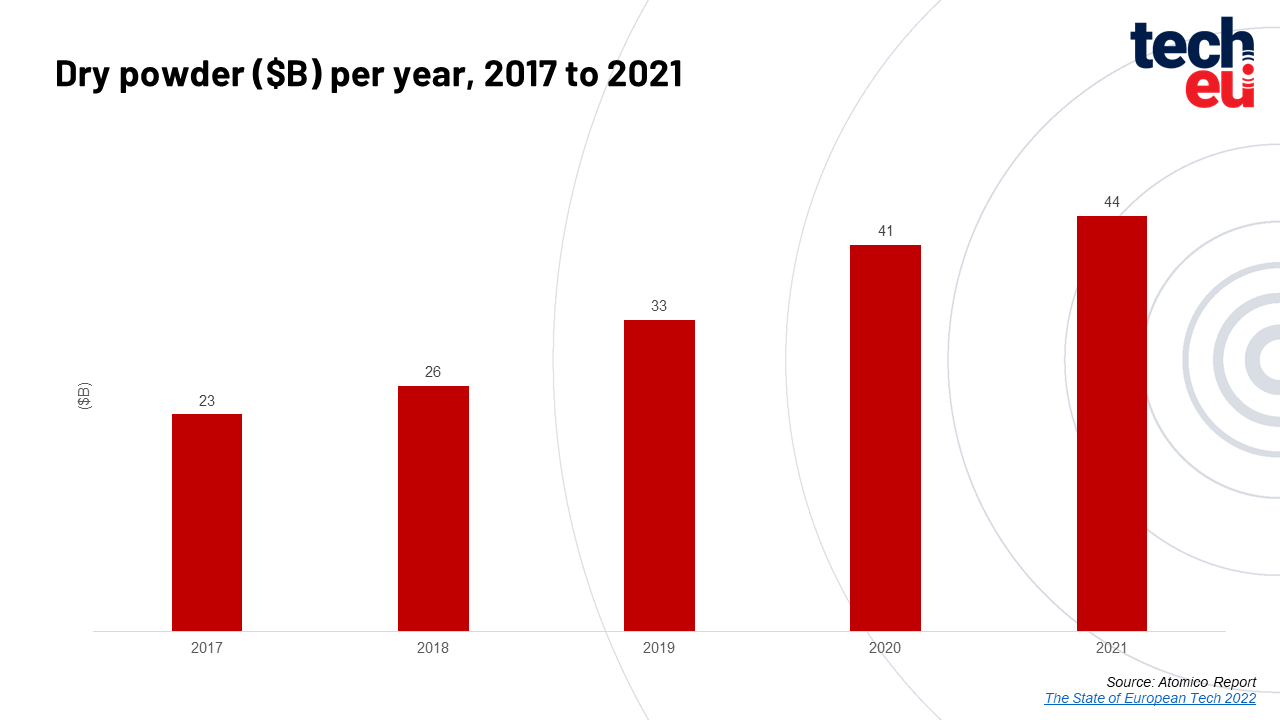 The Invest Europe data also indicates, as one might expect, the level of private equity funding available has risen in accordance with that of its Venture fund counterparts.

While the dry powder numbers have been steadily rising across Europe for the past five years, some geographic regions continue the upward trend with two notable markets seeing a decrease in stockpiled capital for the first time since 2017.

This number is particularly important given that while most funds have a continental, if not global mandate, investors tend to invest in their own backyards when given the chance.

With a number of new funds announced in the neighbourhood, it should come as no surprise that Southern Europe and Central and Eastern Europe saw the largest gains in the amount of dry powder, 3x and 2.7x respectively.

On the other end of the spectrum, the Nordics and the UK & Ireland saw a decrease in dry powder, 11% and 10% respectively.

Now, that’s not to say that Southern and the CEE region are “winning” and that the Nordics and the UK and Ireland are “losing”. In fact, it might just be the opposite, as investors found more opportunities to pour funding into these markets, whereas their Southern and CEE counterparts did not, thus, stockpiling available capital.

Slowing down the pace

While these stockpiles might be adding up, fund managers are slowing down. Almost half of the Series A+ investors surveyed indicated that they’d done fewer deals than they were expecting over the course of 2022. When looking at later-stage investments, 60% of Series C+ inventors indicated the same.

Moving forward, this slowed pace seems to be the consensus, as nearly ¾ (71%) of the larger funds surveyed said that they expect to execute fewer deals than initially anticipated. 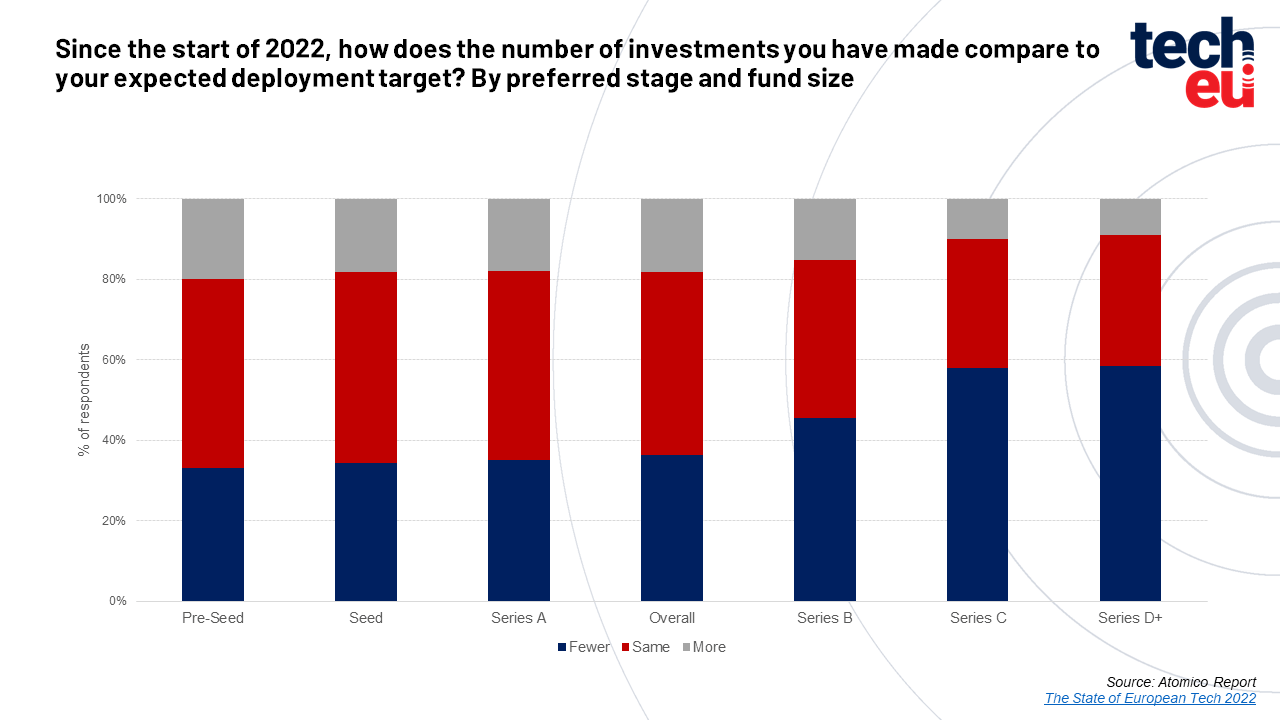 As Atomico conducts this survey on an annual basis, it should come as no surprise that year-over-year, with the economic realities of 2022 staring us all in the face, almost 50% of VC respondents indicated that competition at their primary point of entry had decreased. 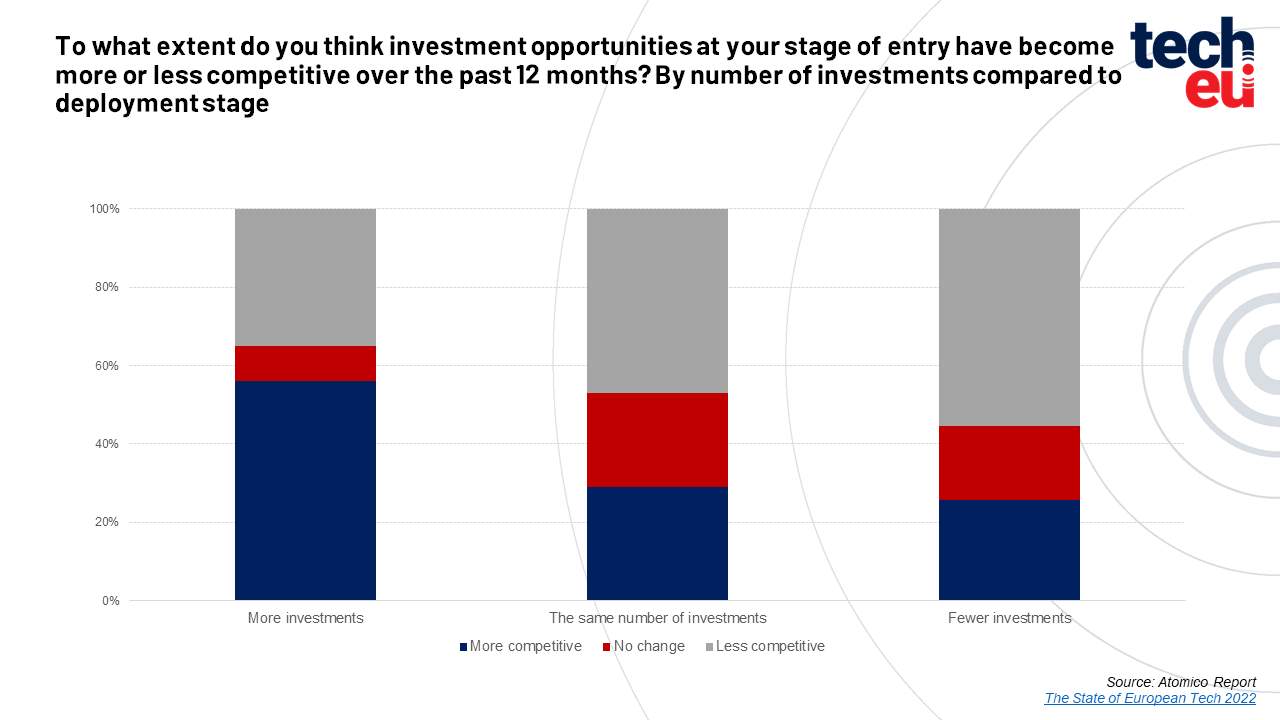 And what a difference 365 days can make, as just one year prior, an overwhelming majority (93%) of VC respondents said that competition was up. Again, not surprising to find this year down, last year up, as 2021 will most certainly go down in the history books as a red herring.

Interestingly though, nearly a third of respondents said that opportunities at their stage of entry were more competitive than last year, indicating that even though the market has cooled and shifted focus, investors are still going shoulder to shoulder to get in at the right stage with the right companies.

Divvying up this response, the Atomico report found the competition to be stiffest across early-stage investments and then following a decreasing percentage as funding rounds developed. 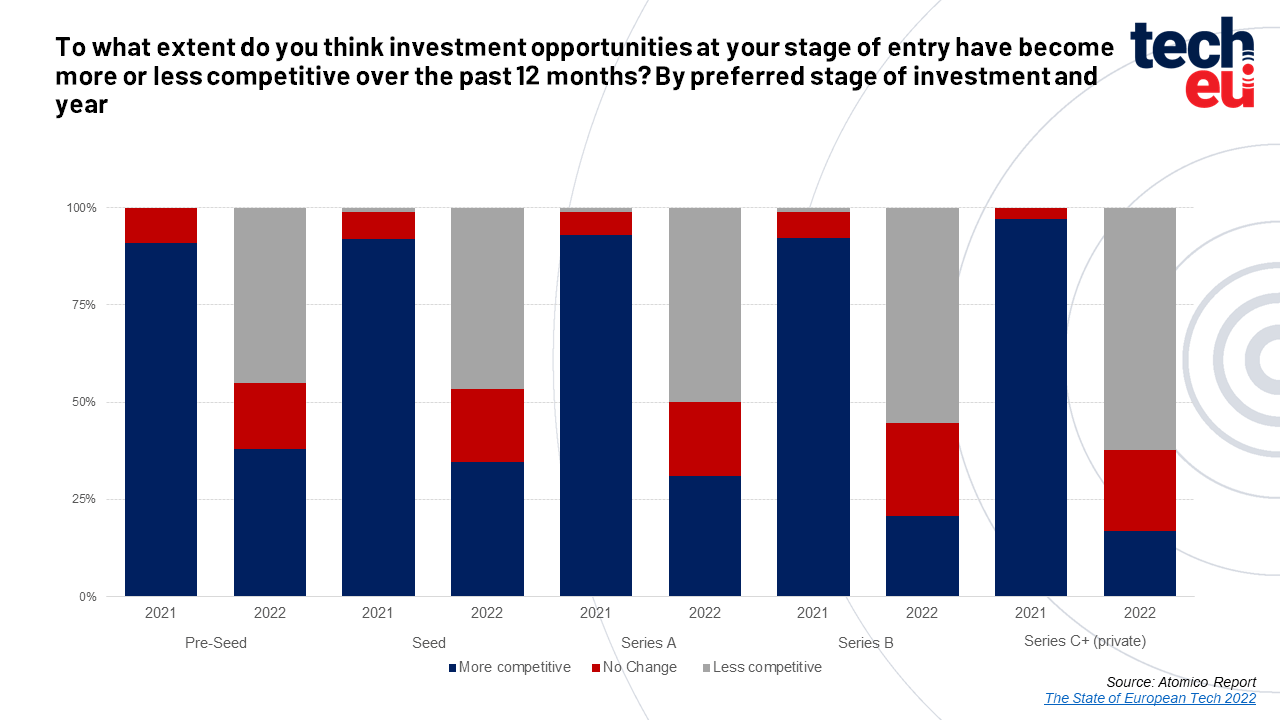 In addition to our top-level highlights of European VC presented above, we’ve also had a look at:

While dry powder levels hit an all time high of $44 billion, European VC activity and competition slowed in 2022
Comments
Follow the developments in the technology world. What would you like us to deliver to you?
All