U.S.-based Distractify, one of those digital media startups that are all about making content go as viral as possible (à la Upworthy, Viral Nova and BuzzFeed), has made a small acquisition.

The company, which was founded by 21-year old Quinn Hu, has picked up a site called Trendolizer, which started out as a hobby project.

Trendolizer was started by Belgian native Maarten Schenk as a hobby project. Schenk, who studied at the University of Antwerpen and previously worked on Movable Type at Six Apart, will join Distractify as its 'lead data engineer'.

Trendolizer automatically detects (potentially) popular stories, videos, links and whatnot, collecting a large number of links from a variety of sources (Reddit, Twitter, etc.) and then employing the Facebook API and a ranking algorithm to find out which ones are currently trending. 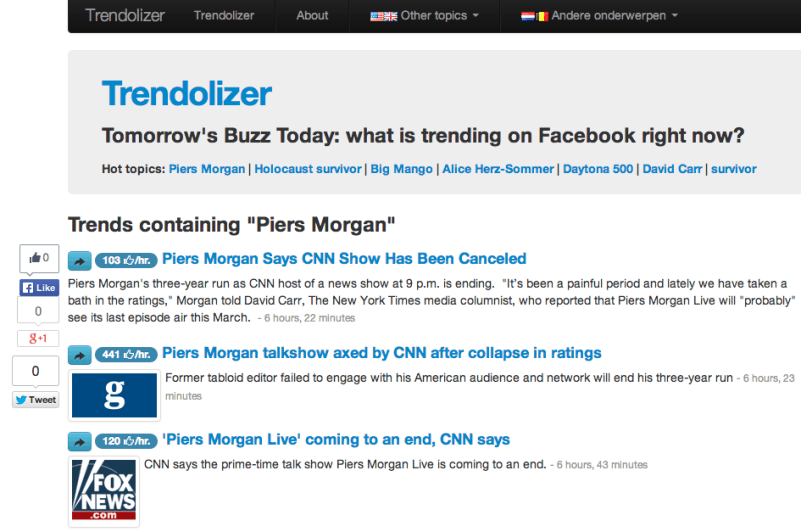 That's obviously very valuable technology and expertise for a site like Distractify, which makes a living out of making content go viral.

According to a recent profile on Distractify, the site attracted 21 million unique visitors worldwide in November 2013 alone (after launching a month earlier).

In the same month, Schenk notes that Trendolizer reached 400,000 visitors.

Distractify is completely bootstrapped to date, but I wouldn't be surprised to see the media startup raise some funding sooner than later, given its momentum.

Viral media startup Distractify acqui-hires Belgium's Trendolizer
Comments
Follow the developments in the technology world. What would you like us to deliver to you?
All

NEXT
Mobile bookings on Booking.com nearly tripled to $8 billion in 2013; big push into the US up next
What's this? Press releases, on a…
Robin Wauters