Taking the pulse of startups, VCs, and innovation in 'Emerging Europe'

East-West Digital News (EWDN), the news agency covering the startup ecosystems of Russia and Central and Eastern Europe, has published an extensive research report that investigates the state of tech and VC activity throughout the region.

The report, Startup Investment & Innovation in Emerging Europe, is backed up by data on funding deals, surveys with industry players, and media reports. It aims to shine a light on investment and startup activity throughout 24 countries in Central and Eastern Europe, including Russia and the Baltic nations. The report examines traditional VC funding deals and the advent of initial coin offerings (ICOs).

Given the wide berth of countries covered in the report, there is a very mixed view of the landscape with greater activity in some countries skewing the averages compared to much less developed startup ecosystems. The Baltic countries, and especially Estonia, have high levels of technical talent and increasing levels of startup funding, meanwhile, Russia and Slovenia are well represented also.

Russia is a huge presence, unsurprisingly, given its larger economic position and technical pedigree of founders and companies, such as giants like Mail.ru, Yandex, and VKontakte as well as fresh-faced deep tech startups like Cognitive Technologies.

This is much different to the scene in, say, Albania or Serbia, where the startup ecosystems are at a nascent stage, to say the very least. 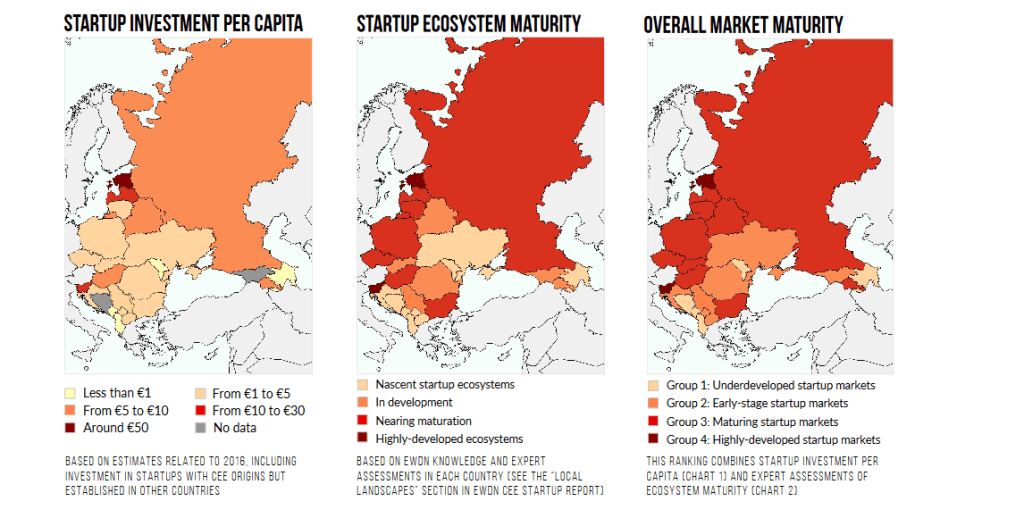 Throughout the region, there have been a number of big funding rounds in the last two to three years.

Slovakia’s AeroMobil has eyes firmly on the future with its “flying car” that has attracted investors from Asia but no investment figures have been disclosed so it’s difficult to pinpoint where AeroMobil stands against rivals like Lilium and Volocopter.

Frame has roots in Serbia but is now based in California, a common route for many CEE entrepreneurs looking for opportunities. It raised $16 million last year from Microsoft Ventures and Bain Capital Ventures, among others. 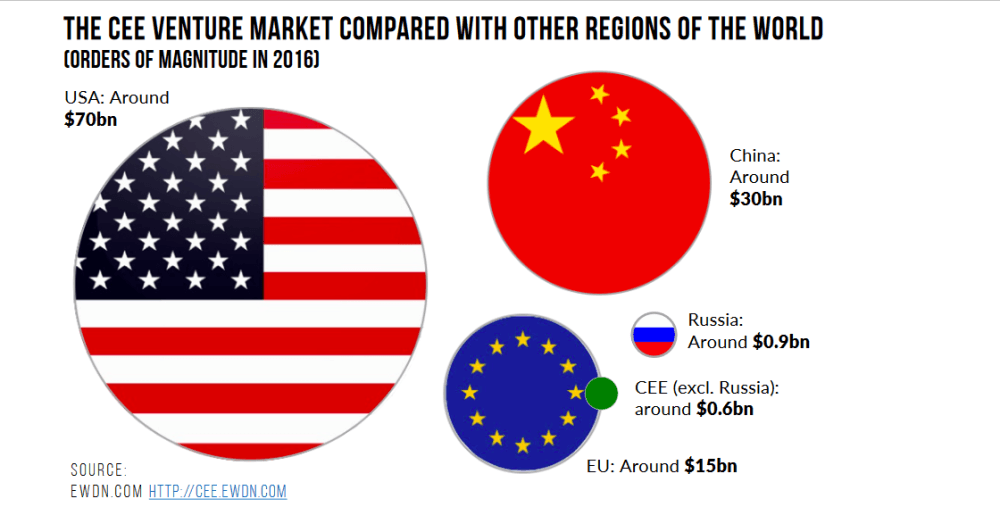 Catching up on deal flow

Despite these bumper rounds, CEE is still behind the rest of Europe for startup deal flow.

While the likes of the European Investment Fund (EIF) has contributed to local ecosystems around the region, Western European and other international VC firms aren’t as quick to invest in CEE as other corners of Europe.

There is still an air of uncertainty for outside investors coming in. tech.eu has reported before on the startup funding climate in countries like Ukraine.

The absence of meaningful legislated protection for investors is off-putting. Coupled with a general lack of awareness about these ecosystems and not to mention political unrest and corruption in certain nations, it’s not hard to see why CEE startups are at a disadvantage.

A common thread when discussing CEE tech is talent versus business. The region has a wealth of skilled professionals – notably in burgeoning fields like computer vision – but a wanting VC scene and business-minded acumen has left a void. That is why many startups, like the aforementioned Frame, are now based in other countries.

“What these countries have in common is their strong technology talent and the fact that access to local, early stage venture capital is very limited,” Andej Kiska, partner at Credo Ventures, a fund that is dedicated to the region, said in the report. “We saw in this an opportunity to be one of the first, if not the first, institutional early stage venture capital funds in each of those countries.”

For many countries, their VC scenes are in desperate need of stimulation to, in turn, stimulate the startups, curtail the brain drain, and maintain the value in the region. Furthermore, the locally-founded VC scenes are lacking in several countries, like Albania, Bosnia & Herzegovina, Kosovo, Montenegro, and Moldova, which do not have any notable local venture capital firms.

Given all the talk about lacking VC activity, it may not come as a surprise that CEE has seen a lot of initial coin offering (ICO) action, most notably in Russia.

“The area of Central and Eastern Europe seems overrepresented on the global ICO map,” said Adrien Henni, editor of EWDN and lead researcher on the report. In 2017, EWDN identified 237 ICOs and pre-ICOs that have raised $1.2 billion, accounting for more than 20% of the global ICO market. That is a much different picture compared to CEE’s standing in the traditional VC market. According to Henni, this shouldn’t be surprising given Russia and CEE’s well-versed backgrounds in deep tech like blockchain.

Russia is, by a considerable margin, the most active in the ICO space here. EWDN, with data from ICObench, tracked 130 token sales held by Russian companies in 2017. In second place for number of token sales is Estonia with 22. CEE ICOs are also raising more on average ($5.4 million) per sale versus the rest of the world ($4.2 million). 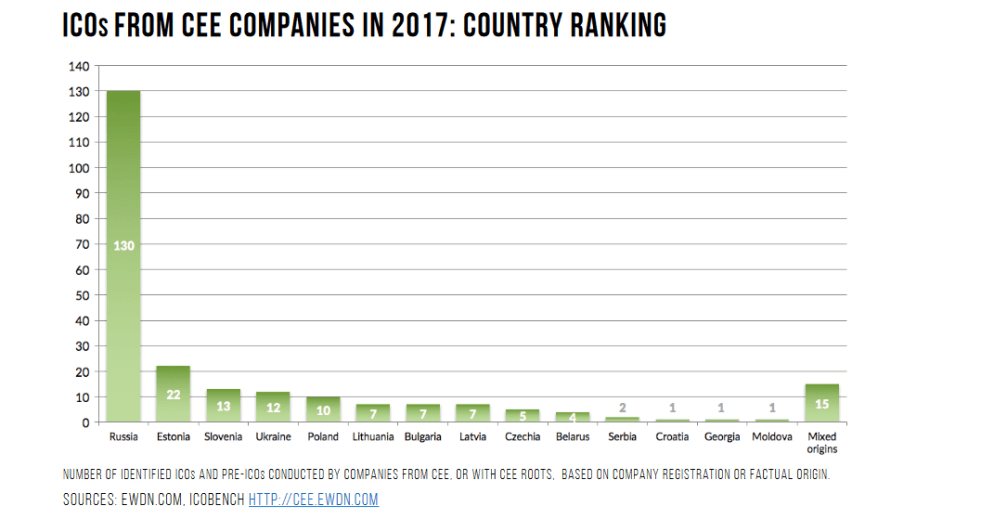 ICOs have been subject to much criticism by regulators and investors. Reports recently highlighted that most ICO projects have failed. While the sums of money mentioned above grab the headlines, they give the false illusion that ICOs are quick and easy money. Russia’s AltoCar, for example, hyped its ICO last year but failed to meet its targets.

“Venture capital in Russia has been scarce and expensive in the recent years as a result of the economic crisis and the international sanctions,” explained Henni on why ICOs have garnered some much attention. “Russian funds have lots of money, but they tend to invest more and more abroad, leaving fewer means available for domestic startups.”

There is a similar feeling across the region but the party could soon be over. Russia is expected to bring in new regulations later this year and the European Securities & Markets Authority (ESMA) may act. On the flipside, Belarus has introduced very favourable rules for crypto companies, including tax-free status for cryptocurrencies.

What’s on the horizon?

What does the future hold for CEE? For many startups, they would like to see more local grassroots VC funds come along to invest at the seed stage. Others would like more welcoming conditions and regulations to boost international investor confidence.

CEE’s biggest strength remains in its talent, specifically in the fields of AI and computer vision where startups in Russia, Ukraine, and Estonia have the potential to thrive and be European leaders provided that they have the right support. On the ground, there are resources and innovation campuses like Vilnius’ Sunrise Valley Park, Kyiv’s Unit City, Moscow’s Skolkovo tech hub, and conferences such as Infoshare in Poland and DigitalK in Bulgaria.

CEE has the chance to play an important role in Europe’s digital future, said Plamen Russev, executive chairman of the Webit Foundation, which runs the Webit Festival (also in Bulgaria).

“Instead of competing within the region’s smaller markets, we can create targeted intelligent specialisation, drawing on existing areas of expertise as well as creating new ones. This way one country’s industry will be able to expand into the broader European market, without having to compete within the region,” said Russev.

To reach that point, there will need to be more efforts from governments to nurture their ecosystems.

“Achieving economic transformation of this magnitude will require not only legislative initiatives, but also state support in the form of subsidies and reduction of the administrative burden on the new businesses.”

Taking the pulse of startups, VCs, and innovation in 'Emerging Europe'
Comments
Follow the developments in the technology world. What would you like us to deliver to you?
All