Kicking up the Scoville heat units, The Sauce plants £1.25 million in seed round

London-founded video first dating app The Sauce has raised £1.25 million in a seed funding round. Revolving around the premise that users are more than just a photo, saucy individuals can showcase their energy, their voice, their moves, and their friends in video format, all elements that, “make you, you – your secret-sauce.” The seed funding will be used to continue further development of the app and keep the UK expansion fires aflame.

Founded in 2020 by serial entrepreneurs Emma Clark and Sachin Karia, The Sauce officially launched in May of 2021. The startup’s HY 2021 numbers are eyewatering, boasting 38x growth, landing them squarely in jalapeño territory, the sauciers are now eyeballing the red savina range as user numbers are anticipated to continue to double each month for the first part of 2022.

Putting all capsaicin quips aside, by employing video The Sauce is combatting troubling racial bias and prejudice issues that have plagued photo-based apps. In other words, the service is giving users better quality, more nuanced information that allows for a more accurate perception of what that next potential mate is really like. And lest we forget, through video, the nefarious practice of catfishing is next to impossible. We’ll leave Respeecher and Colossyan out of this argument. For now.

“In testing, perception and judgment are unilaterally improved with video profiles that are more dynamic and verbal, rather than simply static information,” explained Karia. 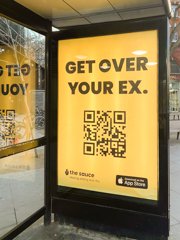 Building upon, and having fun with their own name, The Sauce is angling to differentiate itself from numerous competitors in the dating app space. The startup has blanketed The Big Smoke with a series of tongue-in-cheek QR code adverts urging singletons to "get over their ex", and "find someone to get lockdown and flirty with.” Similarly, the company powered a guerilla marketing campaign that saw a covey of handcuffs locked to Millenium Bridge with nothing more than the text “f*ck cuffing season, cross that bridge when you come to it,” attached.

The Sauce’s £1.25 million seed funding round was led by new European investment fund and venture builder ID11 (not to be confused with the Ilford film developer of the same name), which is in turn backed by JCBCP llp, Jean-Charles Bully’s £500m Fund of Fund, and Raphaël Devreker and Maxime Favier, the founders of The Photo Academy.

“The Sauce has solved a real pain point for users by building a platform that mimics real life interactions and it’s struck a powerful chord for many. The technology that they have developed is a real game changer and we look forward to working with an extraordinary team led by The Sauce founders Emma and Sachin,” commented Bully.

Kicking up the Scoville heat units, The Sauce plants £1.25 million in seed round
Comments
Follow the developments in the technology world. What would you like us to deliver to you?
All